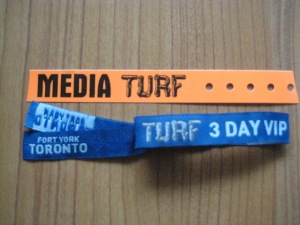 The second edition of the Toronto Urban Roots Festival (TURF) finished up yesterday.  Talk about a well organized and fun festival right in our fair city of Toronto.  When we were leaving last night we were actually thinking about next year’s line up – that’s a good sign of a great three days!

We got to Day 3 a bit late but just in time to see Jenny Lewis kill it. You have to love a girl who can work a stage like David Bowie and yet bring a chilled sly country twang worth of the ghosts of Loretta Lynn, and Patsy Cline with swirls of pop to boot. 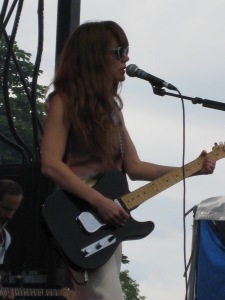 We decided to lounge under the trees after Jenny’s set.  Which was a good idea as it was still pretty sunny outside and after a two day sun burn this body needed a moment.  TURF was perfect for lounging.  There was never a need to hustle or to have to ‘move’ from our lil spot.

When Jeff Tweedy came onto the stage we were so Zen as we sat beside an older punk who was clearly meditating – we just rolled into his folksy set with ease.

As recently announced, Wilco frontman Jeff Tweedy has formed a new band with his 18-year-old son, Spencer, under the fitting moniker of Tweedy. They will release an album called ‘Sukierae’ on September 16 through Wilco’s label dBpm.

Seeing the camaraderie and genuine mutual love of making music between father and son was inspiring.  Tweedy even mentioned how it took him ’18 years to grow a drummer’.  Imagine being 18 years old and playing festival dates with your fan adored pops?  Just all around super sweet.  That vibe indeed complimented the familial feel of TURF.

It was even more romantic as I observed a young dad playing with their 2 year old son’s around us.  The boy was wearing one of those lovely life saver colored headphones as he played with sticks quietly. His parents watched Tweedy and for a good 30 minutes there wasn’t a peep out of the kid.  TURF kids were already well seasoned concert goers.

We had a grand time at TURF 2014.  For a three day weekend of fun and frolic everything was done right.  From the details, a lovely mix of music concert goers from young to mature, family centric, teen friendly and on point musical programming.   We got everything we wanted and more.  Plus the bonus of relaxation as the sun set above the Gardiner Expressway will carry me through the rest of the year until we meet again in 2015 TURF.