Toronto’s Riot Fest & Expo is coming at us fast and furious on September 19 and 20 at Downsview Park. Weezer, The Prodigy, Bleachers, Cancer Bats, Courage My Love, and Ritual join a diverse array of bands previously announced. To top it off, Weezer will play both days of the festival, performing their eponymous debut (known as the Blue Album) one day and Pinkerton on the other. For fans a little tight on budget – Riot Fest brings back its layaway program, with the option to pay ticket costs in several installments during the lead up to the fest.

Here is the third of ten Toronto’s Riot Fest & Expo Spotlight’s we talk Babes in Toyland and Courage My Love.

Babes in Toyland are an American punk rock band formed in Minneapolis, Minnesota in 1987. The band was formed by Oregon native Kat Bjelland (lead vocals and guitar), with Lori Barbero (drums) and Michelle Leon (bass), who was later replaced by Maureen Herman in 1992.

Between 1989 and 1995, Babes in Toyland released three studio albums; Spanking Machine (1990), the commercially successful Fontanelle (1992), and Nemesisters (1995), before becoming inactive in 1997 and eventually disbanding in 2001. While the band was inspirational to some performers in the riot grrrl movement in the Pacific Northwest, Babes in Toyland never associated themselves with the movement.

In August 2014, Babes In Toyland announced that they would be reuniting, touring and possibly recording again. As of February 2015, the band has booked several shows.

What is courage? When you’re a young rock ‘n’ roll band—courage is throwing yourself into your music fully and completely. It’s stepping onto a stage and just given’r. It’s touring new places far from home, and opening up, scars and all, to your fans. Courage is saying what you really think. It’s being unafraid of change, of becoming who you really are.

Courage My Love is all of these things.

Call them a power trio, pop-punk, alternative metal. As you wish. They grew up on it all. But while you are jumping around and banging your head with abandon, don’t miss the message: They have no appetite for destruction. They do not seek to destroy. No, Courage My Love is here to uplift, inspire.

Becoming, the band’s new EP, produced by Chris Perry in Toronto, is eight tracks bled out of Courage My Love during a period of exciting changes. “Our first EP For Now came out when we were 17,” explains Mercedes. “When you’re our age, a lot can happen in two years.” Yes, many good things. Like a JUNO Award nomination for ‘Breakthrough Group of the Year’, heavy video rotation on MuchMusic/MusiquePlus, more than 6.1 million YouTube views, being named as one of Alternative Press Magazine’s ’100 Bands You Need To Know’ and being asked to be on the full Vans Warped Tour 2014 (42 dates). “Before we went on tour we’d never been away from home,” says the guitarist. “You meet all these new people, and you learn about yourselves. We’ve all grown a lot. That was the inspiration for Becoming.”

Opening track “Skin and Bone” captures the fear and longing of leaving something behind. “We’re too old to die young,” they sing over thunderous beats, the heart of the matter. Hard- knocking first single “You Don’t Know How” cranks it up, intense and defiant: “Find out I’m strong enough on my own now.” By the time the EP closes with the haunting ballad “Dark Wood, Dark Water,” about finding the one thing that pulls you out of the darkness, Courage My Love’s mission is clear: rock out, be happy, stay true.

For this next generation of musicians, that means truly embracing social media. With their popular self-produced mock-reality TV show “The Unreal Lives of Courage My Love”, podcasts and viral videos, Courage My Love not only connect with fans, they reveal more of their true selves. It’s all part of what they do best. “This whole band is about being yourself,” says Phoenix. “You don’t need to play by the book to be successful. Being a girl isn’t that big of a deal in music anymore. You don’t need to have a certain look. Break the rules, stand apart.”

Check out Babes in Toyland and Courage My Love at Toronto’s Riot Fest & Expo!

In previous years, Riot Fest and their partners at Union Events have cultivated lineups that have featured reunions and rare appearances—and 2015 is no exception. Bands such as Drive Like Jehu and Thrice will be making reunion appearances at Riot Fest & Expo. Moreover, rare appearances by Alexisonfire, Echo & The Bunnymen and Motörhead give 2015’s edition its unique feel.

Outside of the announced bands, this year’s festival will also include a circus tent featuring the Hellzapoppin Circus Sideshow Revue, a miniature golf course, a video arcade hall, and a wide array of food and drink options.

Check out the daily schedule line up! 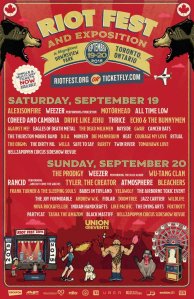