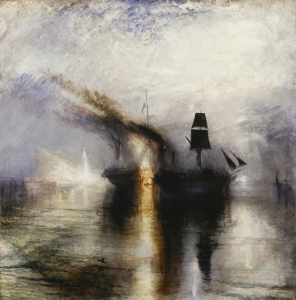 This fall the Art Gallery of Ontario (AGO) will host a major exhibition celebrating the experimental and contemplative works of Joseph Mallord William Turner (1775–1851), a giant of British art. Opening on Oct. 31, 2015, J.M.W. Turner: Painting Set Free features more than 50 large-scale paintings and watercolours on loan from Tate Britain and makes the case that the radical works created in the final 15 years of Turner’s career, with their arresting use of light, represent a fulfilment of the artist’s upward trajectory.

Fiercely driven and radically experimental, Joseph Mallord William Turner (1775 – 1851) was a giant in the history of British art. Praised by critics across the U.K. as ―an exciting, entrancing show‖ (The Guardian) and ―sensational‖ (London Evening Standard), the acclaimed exhibition J.M.W. Turner: Painting Set Free opens in Toronto at the Art Gallery of Ontario (AGO) on Oct. 31, 2016. Featuring more than 50 paintings and watercolours on loan from Tate Britain, the exhibition focuses on the artist’s later works, famous for their rich colour, textures and arresting use of light. Timed-entry tickets for J.M.W. Turner: Painting Set Free at the AGO go on sale Oct. 16, 2015. The exhibition is celebrated by the launch of the AGO’s permanent new hours of operation, featuring extended Friday nights with special Turner-themed programming throughout November.

Coordinated by Lloyd DeWitt, AGO Curator of European Art, J.M.W. Turner: Painting Set Free shows how Turner’s final years were a time of exceptional vigour, as he continued pushing the boundaries of his artistic practice while travelling across Europe to capture increasingly dramatic landscapes on canvas. Challenging the myths, assumptions and interpretations that have grown around Turner’s later works, the exhibition is organized thematically and takes a focused look at his travels, his fascination with classical history, religion and mythology, his love of the sea, and his preoccupation with atmosphere and light.

J.M.W. Turner is the best known British artist, but here are few fascinating facts you might not know:

•In the later years of his career his art became more radical and experimental, incorporating unusual materials like tobacco juice and stale beer, and was derided by conservative critics for his unconventional methods

•He did some pretty drastic things for his art, like having sailors tie him to the mast of a boat during a major winter storm to “experience the drama” of the elements during a storm at sea

•His father lived with him for 30 years, serving as his assistant and mixing paints