Like the U.S., Canada has it’s own historical connections with our First Nations roots. But there is also a history that is so dark and painful that even now deacdes later our First Nations people are experiencing the grief, loss and devastation inflicted upon them by Canada’s first European settlers.

When I visited the Smithsonian’s National Museum of the American Indian I was wary of what I may see and experience.  Instead, I immediately felt an instant emotional connection.  The beauty of the arts, costume and honour of America Indian culture is a beautifully curated in an inclusive and diverse manner.  The space also serves to kindly educate the public locally and abroad about what it means to be an American Indian and how important it is to dwell upon as one of America’s own First Nations.

The Smithsonian’s National Museum of the American Indian in Lower Manhattan, the George Gustav Heye (pronounced “high”) Center, opened in 1994 in the historic Alexander Hamilton U.S. Custom House, one of the most splendid Beaux-Arts buildings in New York. The museum features year-round exhibitions, dance and music performances, children’s workshops, family and school programs and film screenings that present the diversity of the Native peoples of the Americas and the strength of their cultures from the earliest times to the present.

The museum’s permanent exhibition “Infinity of Nations: Art and History from the Collections of the National Museum of the American Indian” showcases some 700 objects from Native North, Central and South America. Objects include an exquisite Olmec jade head, a rare Anishinaabe man’s outfit and a remarkable Charles and Isabelle Edenshaw (Haida) spruce root hat. This unparalleled assemblage of American Indian cultural material represents the tremendous breadth of the collections and the richness of Native art.

In addition, the museum hosts a selection of changing exhibitions that present and reaffirm the Native voice. The schedule includes exhibitions developed by the museum from its collections, installations of contemporary Native art and significant traveling exhibitions from other institutions. 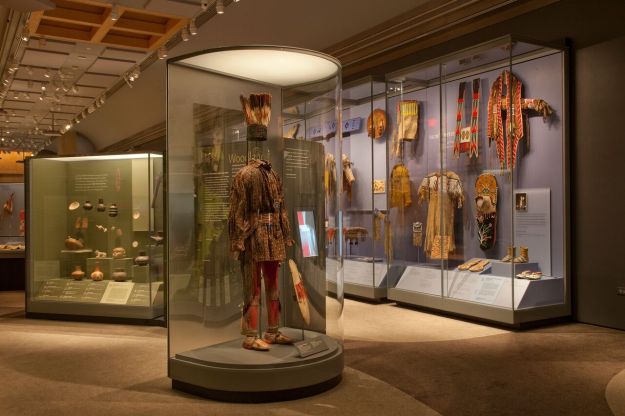 The museum hosts Native musicians, dancers, artists and elders in presentations of their art and cultural heritage and in informal programs that invite them to share directly with museum visitors the life ways and world views of Native peoples. Programs include dance presentations, hands-on workshops, storytelling programs and annual events, including the Children’s Festival and the Native Sounds Downtown concert series.

The Film + Video Center of the National Museum of the American Indian is dedicated to presenting the works of Native Americans in media. An international leader in the support and presentation of indigenous film and video projects, the Heye Center hosts the Native Cinema Showcase, an annual presentation of films held at the Santa Fe Indian Market in New Mexico. Screenings and discussions with filmmakers are also periodically held in the museum’s auditorium.

‘Circle of Dance’ exhibit (October 6, 2012–October 8, 2017) Consistent across time and cultures is the use of the body to communicate and express—to tell stories, participate in the cycles of nature, mourn, pray, and celebrate. Throughout the Americas music and dance have always been an essential part of the spiritual, cultural, and social lives of Native peoples.

During your time at the National Museum of the American Indian, please check out their amazing and informative tours.  Specifically the Alexander Hamilton U.S. Custom House Tour.  Tour highlights include a discussion of the history of the site, architect Cass Gilbert, and sculptor Daniel Chester French; viewing the Collectors Office with Tiffany woodwork; Reginald Marsh murals; and the 140-ton Rotunda dome by Rafael Gustavino.  It is a free tour and a great way to go a little bit deeper into what the museum has to offer on site.